In 2014, Ebola swept across three West African nations like a scourge, terrifying and deadly. Fear gripped the world not unlike today. Millions suffered through quarantines. The media echoed with similar calls for travel bans, border closings, and anger over missteps by world leaders and health care officials. Although Ebola and COVID-19 are not similar as viral diseases, the responses to fear remain sadly the same—riots over quarantines; attacks on those trying to help; rumors of geo-political plots.

I was in Liberia on July 27, 2014, the day it was globally reported that Dr. Kent Brantly and his SIM colleague Nancy Writebol had contracted Ebola. That was the day fear came. Traveling with a gospel team, we had made a significant connection with leaders of a remote, unreached Gola village to bring clean water and show the Jesus film. Standing on the border posing for photos, we received texts of the news and shortly thereafter were escorted from the gates. We returned to deserted and fearful streets of Monrovia.

In the days that followed, I struggled with real anxiety, but was able to complete my project and return home to twenty-one days of social distancing and daily temperature checks. Writebol simply struggled to survive after putting her life on the line to serve the Liberian people. Many vilified her for taking foolish risks and advocated for the isolation of West Africa, tacitly advocating for the deaths of hundreds of thousands. But by God’s grace those voices did not prevail. Writebol and the spirit of perfect love she represented did. Lives were saved and an even worse catastrophe was averted.

In 2017, I met Writebol and shook her hand. It isn’t often you get to meet a hero of the faith. She was back in Liberia serving God and the people she loved. I was there among thousands of Gola people to celebrate clean water and hundreds of new believers. Love had driven fear away in a miraculous way and God was blessing us with a wonderful harvest.

Perhaps you are feeling discouraged, anxious, and maybe even a little angry these days. Don’t lose heart. Let me encourage you to embrace Writebol’s example. If you can’t serve on the front lines of the pandemic now, embrace and support this next generation of Writebols who are. No matter what the circumstance, you can choose to be part of God’s miraculous story of love and redemption. A harvest awaits.

This article was written by K. Scott Drury. Scott is a Regional Representative for FMF Financial Services.
Contact Scott: https://fmffinancial.org/scott/

Scott Drury and Jesus Film team leader at the Liberian border on July 27, 2014. 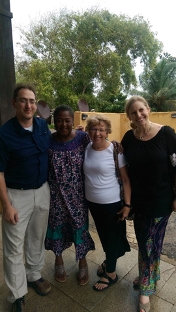 Do Pneumonia Vaccines Protect from Coronavirus?
Do vaccines that are currently offered to protect against pneumonia provide seniors any protection against the novel coronavirus disease? I have always been bad about getting vaccinated, but this coronavirus pandemic is causing me to change my thinking.
Read More »

Who Will Receive Your Property?
“Who should receive my property?” Helen asked her attorney, Clara. “There are so many decisions to make. Since Morgan passed away, I need to make these decisions myself…”
Read More »

Flexible Deferred Gift Annuity
Lewis is a 54-year-old executive at a large healthcare company. He purchased company stock during years when the stock price was low, and now the stock has grown substantially.
Read More »

We believe that with effective counsel and financial management, each person can multiply the impact of the resources entrusted to their care.